Attn Dog Parents: Here’s How You Deal With a Picky Eater

I have a picky eater so believe me when I tell you, I feel your pain. How frustrating is it when your dog turns his nose up at absolutely everything you give him! Sometimes he’ll eat the same thing for a few days maybe longer, other times he’ll sniff the bowl like it was filled with poison, look at you like “what in the world are you trying to do to me?” and look for a way to escape. Okay I’m describing my dog now.

Is your dog a picky eat or is he sick?

It’s really important to figure out if your dog is being picky, or he’s feeling unwell. Here are some questions that can help you figure that out.

♦ Has your dog always been fussy or is this a recent behavior?

♦ Is he drinking more? Peeing more?

♦ Does he have diarrhea after eating?

♦ Has he become restless?

♦ Have you changed his food lately? Maybe you bought something you believed to be better quality, but he’s not interested or it’s upsetting his stomach

♦ Is he still going for walks or is he less interested?

♦ Any other changes in behavior lately?

♦ Any changes in his environment lately? Have you moved homes? Welcomed a new 2 or 4 legged creature?

♦ Did you previously work from home and are now going off to work? (this one isn’t exactly relevant in these times!)

♦ Has your dog recently lose a doggy friend? Depression can be a cause

♦ Your dog is finally protesting after eating nothing but dry kibble forever!

What do you think? Have you seen a pattern? Is it possible your dog’s fussiness is a sign of a medical issue? If the answer is yes, or even just a possibility, it’s best to be cautious and speak to your vet as soon as possible. Use these questions as a guide, and write down your answers. Make note of everything you can think of and bring it with you to your appointment. It will not only reduce the chance of you forgetting to mention something, it will be a helpful diagnostic tool as well.

When is picky eating a problem?

If your dog is picky but he’s acting normal, is alert, his coat looks good and he’s maintaining his weight, it’s less of a concern than if he starts losing weight and vitality. That’s when it is possible to be health related as we discussed above.

Can a picky dog starve?

Dogs don’t let themselves starve. If a dog is healthy but just being picky, he will eventually eat. However, if you have an old dog who is being fussy that is a lot more worrisome, and should be taken to a vet right away.

Fussy eaters are made not born

Have you been feeding your dog scraps from the table? It’s no wonder he’s gong to avoid his dog food while he waits for the good stuff!

You may have encouraged his fussiness by constantly buying another type of dog food when he seems to lose interest in one.

It’s one thing to give treats for training, another to do it just because you think he’s looking particularly cute in that moment.

Dogs are very smart, and if they see they’re getting a lot more attention for not eating well, even getting hand fed, that’s a behavior they’re going to want to repeat. They know if they go on strike long enough, you’re going to cave!

Are you sure he’s not eating out?

Has your dog been visiting the neighbor lately for some dining out? Maybe he has play dates and in addition to some fun he’s getting food. How about friendly people in the park giving him treats because he begs so nicely? These could explain your dog’s lack of interest in his own food, when he’s getting such delicious meals elsewhere.

Maybe he doesn’t like the brand, type or flavor

If it seems like your dog is being fussy, but you’ve only ever tried one brand and one flavor, it’s quite possible he just doesn’t like it. Try another flavor and see what happens. If you’ve been feeding him dry, try wet. What about dehydrated or freeze dried? If you’ve had the same experience with 2 or 3 different brands, he’s picky.

Tricks to get a picky dog to eat

♦ Leave your dog’s food out for a set time – 15 minutes should do. If he doesn’t eat in that time, pick up the bowl and do the same thing for his next meal.

♦ Make his dog food more interesting by adding things like:

If your dog has health issues, find out from your vet if there are any foods off limits.

♦ Don’t feed your dog from the table…ever.

♦ Cut down on the number of treats he gets a day, let him be hungry for his meals. If you’re training then treats are important, but check the quality. Use small pieces of boiled chicken or cooked carrots for example.

♦ Get your dog to work for his food. How about having him perform a trick or do some refresher training? Use his meal as a reward.

♦ If his meal space has gotten noisier and more hectic, keep away when he’s eating or move his bowl to a quieter location.

♦ Every once in a while put some, or all of your dog’s meal in a Kong or puzzle toy for a change.

♦ If you leave his food out all the time, perhaps he’s not eating well because it’s spoiled.

♦ Buy a new bowl – yes that does sometimes make a difference!

♦ Feed him in a different location. Instead of the kitchen how about the back deck or dining room?

♦ Maybe his second meal is too late in the day, or his first too early. Consider making a change to see if that helps.

♦ Warm the food in the microwave, it might make it more palatable.

♦ If your old dog seems to be getting picky, he may be having trouble reaching down to his bowl. Achy joints are just one reason, so elevate his bowl by holding it for him, buying a raised feeder or turning a casserole dish upside down and putting it on that. Keep an eye on how much water he’s drinking, and think of elevating that one as well.

♦ Don’t feed your dog the same food every day, week after week, month after month. Change it before he gets fussy. When making a change do it gradually so it doesn’t upset his stomach. Each meal add a bit more of new food to the old until it’s completely switched. This is an interesting article and one worth taking the time to read “Why You Should Switch Dog Foods Frequently.”

♦ Add warm water to dry food to make a gravy.

♦ Maybe he’s not fussy, maybe you’re over feeding him. Take him to the vet for a weigh in, and if the number is high it’s likely he just can’t eat as much as you’re giving him, so cut it down a little.

♦ Have you recently started adding medication to his food? That could easily explain his fussiness. Put the medication in cream cheese, spray cheese, deli meat…

♦ If he’s not getting enough exercise and bored out of his mind, it could certainly explain his apathy. Exercise stimulates appetite so go for a walk, swim or a hike before meals.

Click here to book an appointment with an online dog trainer, or for more information about how we can help 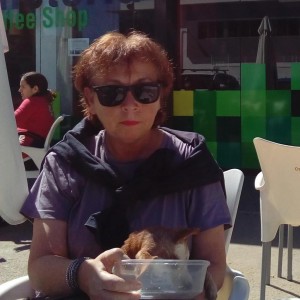 I am a dog trainer and behaviour consultant, specialising in working with first time dog owners. Whether you're thinking of getting a dog and aren't sure if it's the right time, or you've been sharing your life with one for awhile but there are issues you can't resolve, I am here for you. No matter where in the world you live I can help.
All Posts »
PrevPreviousIs Your Dog Destroying the House? This is Probably Why!
NextAre You Ready For a New Puppy? 16 Questions to Find OutNext

Should You Leave a Light on for Puppies? Expert Advice

Can You Allow One Dog on the Couch and Not the Other?

Uncovering the Dangers of Dogs Under Covers

Are Electric Blankets Safe for Dogs?

Panting in Dogs: What is Normal and What Isn’t